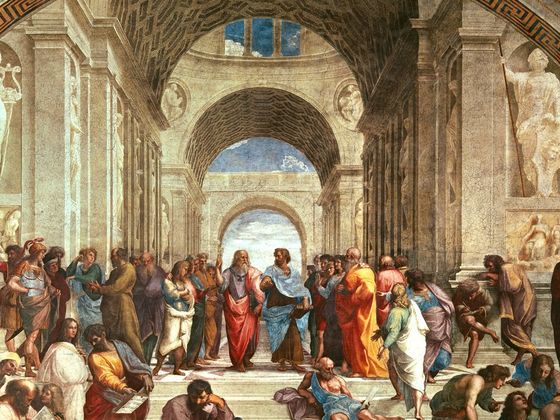 Democracy was born in the middle of the 5th century bce in a little town known as Athens, Greece. I am sure you have heard of it.

Athens at that time was surrounded by the Persian Empire which spanned from Egypt in the west to Turkey in the north, through Mesopotamia to the Indus River in the east.

Sorry for the geography lesson but I am just trying to emphasize how difficult it must have been to try to develop a new political system during that time.

Democracy which literally means rule by the people, required the people to take on new responsibilities, and even though slavery still existed to some degree, it meant that most people were given their right to exercise their new freedom of choice.

In order for people to make the most out of their lives they needed an education system that taught young people the answers to their most pressing questions about “how to live a good life.” So parents sought to find teachers who could give their children a good education. In Athens there were many philosophers and many “schools of thought.”

Many of the teachers were disciples of Socrates, the first philosopher that spoke about the importance of looking inward for the key to happiness. His most famous students were Plato (The Academy) and Aristotle (Lyceum). Take note of the two guys standing front and center in the painting above (School of Athens by Rafael).

There was another disciple, Zeno of Citium. He was the headmaster of his school of thought…the Stoics. Other stoics you may be familiar with are Epictetus, Seneca and the Roman Emperor Marcus Aurelius. Zeno’s school taught a philosophy that was divided into three main subject areas: logos, physics and ethos. I know—it’s all Greek to you. Let me explain in modern terms.

Logos—This educational heading included general knowledge. It was believed that in order to become successful in Athens, students would have to understand how to put an argument together in a logical way, and then learn how to express it. This would benefit all those who chose to become lawyers, teachers, politicians and doctors (not many dentists back then).

Today, the subjects included under logos might be communication skills, problem solving, systems thinking, project management and teamwork. Specifically, for dentistry logos might include examination, diagnosis, treatment planning and presentation skills. I am sure most would agree that logos is quite important for success…the Stoics did.

Physics—This heading would be what Napoleon Hill would have called the specific skills for success. This is the area most Greek philosophers focused on before Socrates showed up speaking about the “Unexamined life.” It’s the stuff of science and the external world. In today’s world it’s biology, physics, chemistry, medicine…and all of the basic sciences. These are the subjects that actually make you who you are. Without them you cannot be a doctor or dentist. Yes—very important, and the reason why everyone goes to any school. In dentistry—it’s all technical dentistry.

Ethos—This is the area of study that was most useful. It includes the personal skills. These are the skills that the Stoics considered important because they taught young people how to live the good life, or how to achieve eudaemonia. This course of study attempted to answer all of the questions surrounding the big question which is, “How do I live the good life?” In Ancient Greece it was the philosophers who were charged to teach this. Today it is the psychologists and neuroscientists. Some of the skills needed for personal well-being fall under emotional intelligence, resilience and decision-making. How important is ethos today? The Surgeon General once said that the number one healthcare problem in this country is the well-being of physicians…it’s important enough to teach, when the burnout rate of our physicians is approaching fifty percent.

In order to practice complete dentistry we must become complete dentists. Not in the sense that we do comprehensive dentistry but more so in the sense that we make sure everything is considered from the health and well-being of our patients to the health and well-being of ourselves and our careers. This should be the responsibility of the dental education system. Until that responsibility is taken more seriously we will only be offering dentists an incomplete education.

Comments Off on Dental Schools (of Thought)