RUSH- The Movie–Who’s the A**hole? 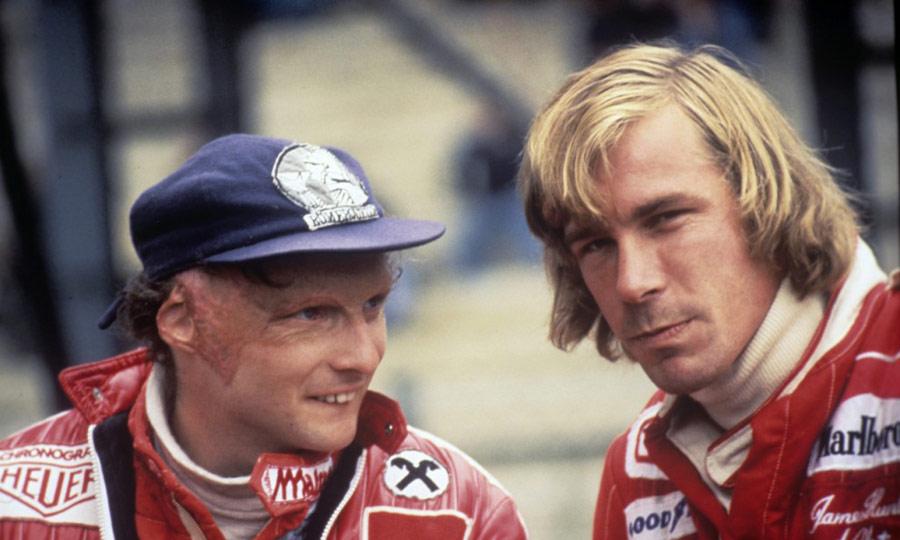 I just saw Ron Howard’s new movie, Rush.  It’s the story of one year of Formula One Grand Prix racing.  That year, 1976 was the year that Great Britain’s James Hunt beat out Austrian Niki Lauda for the championship.  The story is amazing in its own right, but I always ask myself what makes a story important.  It takes more than an interesting story for a Hollywood producer like Howard to back it.

In this case I was confused for a while.  I didn’t know who the main character was, Lauda or Hunt.  James Hunt was the more likeable guy, the one I was rooting for throughout the movie.  Niki Lauda was portrayed as an a**hole.

As a matter of fact that word was used almost as many times as Jamie Foxx used the N word in Django.  But I digress.  It isn’t usual for the audience to root for a jerk.

Not being an auto racing enthusiast I wasn’t aware of what happened in 1976, but I knew the name Niki Lauda and had never heard of James Hunt…the eventual World Champion Driver in 1976.  Why was that?

Because Hunt only raced for a total of 6 years (1973-1979), and only raced for 3 years after winning the controversial championship, but Lauda left a legacy.  And that is why this story is important in a time that our culture celebrates “rock stars.”  Characters with inflated egos that care less about their work than they do about how the public views them.

Niki Lauda was the real deal and James Hunt was just another rock star.  Lauda knew everything about auto racing…what we might call a real master of his art.  He was confident in knowing that his need for being the best was more important than winning that year’s championship and just being recognized as the best.  There is a fine line line in that…and I won’t give away the movie, but Lauda sacrificed winning that prize for something much greater.

And therein lies the reason for Ron Howard seeing Niki Lauda as the hero…and Hunt as the agonist.  Lauda changed.  His confidence rather than his inflated ego enabled him to take a stand on behalf of his work and his industry and what he believed was right.

The contrast of the two characters reminds me of Stephen Covey’s description of the two schools of thought which he calls the Personality Ethic vs. the Character Ethic.

It also reminds me of another cultural icon: Steve Jobs.  When I ask people what they think of Jobs I am often surprised by the number of people who offhandedly just say, “A**hole,” without really knowing that much about the man.

The movie made me think of how we lionize people who are socially competent and “likeable,” without really knowing who they are.

The confident ones are the ones who are willing to stand up for great work rather than just protect their image and their reputation.

James Hunt died at age 46.  Lauda is still alive.  The movie is worth seeing—more than once, like most of Ron Howard’s films.

When I think of today’s dental industry I see many parallels — I am interested in your opinion about rock stars and confident contributors.