In Search of Dignity 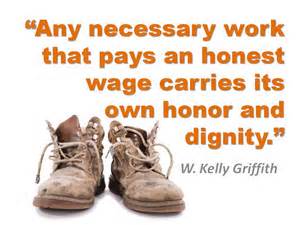 On a recent trip to central Pennsylvania, in order to prevent myself from dozing, I read road signs.  Road signs can really get your attention.  They can be just as creative as some of the better television ads I see these days.

They can be real conversation starters, like those digital WANTED signs that warn us to be careful of criminals on the loose.  And of course those redundant GEICO billboards.  Yes, billboards can be a sign of the times.

That’s why, on my way into Harrisburg I found one sign that really made me laugh.  I guess this is the devolution of what started out as, “If you’ve been hurt in accident…call.”

This billboard implied the same, but it instructed the viewer to call “LarrytheLawyer.com.”  (Name changed).

Dignity.  What does the word mean?  The dictionary definition tells us it is a sense of pride in oneself; self respect, an honorable rank or position.

Well, I guess it is up to each of us to protect our own dignity.  I certainly wouldn’t do what Larry did and display it all over my hometown for the sake of getting people’s attention.

For what you ask?

And that’s the big problem with today’s professions.

Today the professions have narrowed and distorted the idea of dignity.  I wonder if advertising had something to do with it?  Maybe there was something to letting the professions police themselves instead ofd giving way to the free market.  After all health care ethics is a bit more complex than selling cars or insurance.

Maybe it doesn’t stop with the health care professions.  Just last week I was watching Barak Obama interviewing Glozell Green at the White House.  Check her out…she has this unbelievable following on YouTube.  I guess he did this for the same reasons Larry the Lawyer takes out billboards…to get the public’s attention through shock value.

Maybe it’s time we all took a deep breath and put some dignity back into our jobs…it wouldn’t hurt.