The Master Key to Success 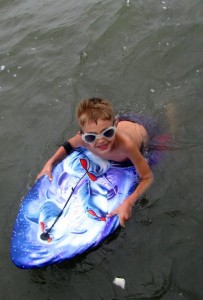 I opened the curtains to let the sun in, hoping the tropical storm had passed.  It was still very early but I could get a sense of how the day would unfold.  At 7 A.M. the sky was steel gray and the the tide was high enough to reach the edge of the condo at our St. Maarten timeshare.  Looking down the beach I saw one solitary figure running along the water’s edge, skidding through the surf on his brand new boogie board.

He just looked up and kept on going like the Energizer bunny.  Few people showed up on the beach that day, but we couldn’t get my son Josh off the beach till dinner time.  He spent hour upon hour practicing on that board.  He fell off and was swallowed up by the tide more than most people could bear.  Every time he fell, he just laughed and got back on…over and over and over again.  Some would call it crazy, but really I thought it was special.

Years later I would never forget that day.  Josh continued to show that trait whenever he tried to learn something new…like skateboarding.  Same deal, but skateboards and concrete are less forgiving than water.  There were less laughs and more blood, but still the same result…mastering a technique through disciplined practice.

I remember his friends saying how good Josh was at skateboarding because he had good balance…oh, if they only knew.  I am reminded of what Michelangelo told a woman who complimented him on his sculptures: “If people knew how hard I have had to work to gain my mastery, it wouldn’t seem wonderful at all.”

I always thought how admirable that quality was…but it’s actually more than admirable.  It’s not even a quality but more of a habit.  In the book The Power of Habit, author Charles Duhigg says that willpower, or self-discipline is the keystone habit of success.

The best part about willpower is that researchers have found it is like a muscle…the more one exercises willpower…the more it is available.  Many studies show how willpower leads to success.  The classic study is the one that tempts young children not to touch marshmallows while they wait for a teacher to come back into a room where they were left alone.  Showing the ability to leave the treats alone was carried out later on in life for the successful children.

For Josh things really took over when he was at UCLA’s Esthetic Program.  He went in with less experience than his classmates.  During his two years there he would come in at 8 A.M and not leave till after midnight on most days.  He slowly improved his skills.  He also gravitated toward dental photography and intuitively learned to master the digital photography.  Today Josh is recognized as a leader in the the dental laboratory industry.  His lab, Niche Dental Studio is growing steadily with some of the finest dentists in the country.  He has had his work published in numerous dental journals including the prestigious Journal of Prosthetic Dentistry and the Journal of the Academy of Cosmetic Dentistry.

I am asked “how did Josh do that?”  Talent?  Luck?   I now go back to willpower.  I have seen people with more talent, and more opportunity who didn’t have the willpower to stay the course.

I also find it interesting that Josh has gravitated toward a group of technicians and dentists that seem to share this same habit.  Their success in the profession is the result of hard work, dedication and sacrifice…not some innate talent.  What is interesting is that “doing hard work” is available to everyone.

Lao-tzu said, “A journey of a thousand miles begins with a single step.”  The journey toward mastery is the same way…one step after another.  Some say it takes 10,000 hours of disciplined practice to master a skill.  That’s commitment, self-discipline and willpower.  In the end, who you know, how much you know, pales in comparison to WILLPOWER—the MASTER KEY TO SUCCESS.

Comments Off on The Master Key to Success